The Chinese Panda coin has been arguably the number one most popular coin in the world since its first striking, forty years ago. Coin collectors worldwide can’t wait to get their hands on the new designs each year. Their low mintages and limited-edition designs make the Panda coins a great investment for bullion investors and coin enthusiasts alike. Many evolutions have taken place of the Panda coin since the first famous design – featuring a sweet panda munching on his bamboo shoot – to this year’s 40th anniversary edition, featuring two young, playful pandas sliding down a hill.

In 1982, to draw attention to the Chinese Panda as an endangered species, the China Mint struck multiple sizes of the coin in 99.9% pure gold. Only 16,000 of the largest one-ounce coins were struck, and these sold out via word-of-mouth advertising like mooncakes during the Moon Festival! Within months, all 16,000 coins were gone from the Mint, and already selling on the secondary market for DOUBLE their initial selling price! A month later, the price doubled again, and these coins were being sold for more than quadruple their original release price. On top of that, its sensational debut led to it being named “Coin of the Year” by the American Numismatic Association after its first year of release. Outcries from collectors for more Pandas resembled the response received a decade or so before by the famed Krugerrand, which also had a sharp rise to popularity. The China Mint realized they had a real opportunity on their hands and decided to turn the giant Panda coin into a series.

The following year, 90% silver Panda coins were released along with the 99.9% pure gold Panda coins. Unlike the Krugerrand or the Maple Leaf, the mint took what many would consider to be a pretty risky move and changed the design! Well, collectors have always influenced coin trends and the history on this one speaks for itself. The one year since 1982 that the Mint released a coin depicting the previous year’s design, Panda collectors raised such a stir that the Mint returned the following year to release a unique design and has continued the annual tradition since!

The image of one singular Panda munching bamboo, has taken many transformations, and has even featured multiple pandas, like a mother and her cub, first seen in 2004, and even three pandas at a time in 2014! This year’s design, which is notably the 40th anniversary, is also the third year in a special ten-year “series within a series” that chronicles a Pandas growth from a cub to adulthood. It is the first gold bullion coin whose design changes annually, and collectors all over the world eagerly anticipate the release of the annual Panda depiction. Some other interesting variations in the last forty years include the weights changing slightly, the quality of silver increasing to 99.9% pure silver, and new tiny 1/20oz coins being released alongside even massive one kilo coins.

Collectors go mad for Pandas! The rich history, beautiful artwork, and highly collectible value of the Panda coins make them sure assets to portfolios of coin enthusiasts and hopeful investors alike! 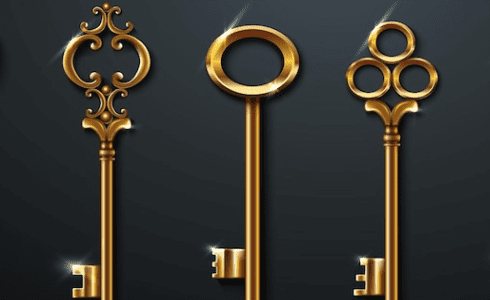 There are three things to consider when investing in collectibles. We like to refer to them as, The Keys to the Kingdom. Whether it’s purely for pleasure, to gain status or prestige, or for potential long-term profit, these three keys should be considered if you’d like to have success with your collection.

The number one thing we recommend is to buy well-known collectibles. If you buy coins that no one has any interest in but you, they won’t have any value to anyone but you. Buy coins that other people are collecting – coins that the demand is high on. Let’s say you’ve decided to collect, for example, movie posters. Many people collect vintage movie posters, and you’ve found two vintage movie posters in mint condition. The first, is a Gone with the Wind poster, and the second illustrates how to drive a military tank. Which poster might fetch a better price at auction for you? Obviously, the Gone with the Wind poster. It is much more well-known, so the demand will be higher and you’ll likely profit more with little time or effort on your end. So, you want to buy well-known collectibles, that’s number one.

Number two is quality. We always say, buy the highest quality that you can afford. Coins are graded on a scale of 1-70; 1 is like a penny you put on the railroad tracks and the train runs over, and 70 is the absolute flawless, finest example known. For this example, let’s talk automobiles instead. Let’s say you’ve got a ‘57 Chevy that’s sitting out in the farmer’s field, and there’s really nothing left but the rust bucket. There’s still some value – it’s a ’57 Chevy! It can be restored. But if you’ve got a ’57 Chevy that’s still underneath the tarp on the dealer’s show floor, that’s never even been taken out on even one single ride… that’s got a lot more value that the same one out in the farmer’s field! Various grades of a coin (1-70, as mentioned earlier) can dramatically affect what the average selling price on that coin would be. Sometimes there will be a 65-grade, Mint-state coin, and it can have an average selling price of $10,000! But a Mint 64-grade of that same coin, just one grade lower, can list at only a thousand dollars. There’s a HUGE swing in the pricing of a coin with just one grade point difference, in many instances. If you’ve found a coin you like –it’s got the things you’re looking for, it’s a well-known collectible, lots of people are interested in that coin– and you can afford to purchase the highest grade available coin, buy it! It’s a great piece to add to your portfolio. But if you can’t afford the highest grade available coin, buy the highest grade that you can afford. It’s still a great coin to own. So always try to buy the highest quality that you can afford.

The final thing we talk about in the Three Keys to the Kingdom, is changeovers. Changeovers can be a little tricky. What the heck is a changeover? A changeover is when something changes within a series of coins. For instance, take the Saint-Gaudens Double Eagle. From 1849-1907, the $20 gold coin maintained the same design, with no part of the coin changing besides the date on the bottom. The obverse had a portrait of Lady Liberty, and the reverse had the flag-chested Eagle. But in 1907, Teddy Roosevelt had been the president for a while, and he was sick of those Liberty-style designs. He commissioned a private sculptor by the name of Augustus Saint-Gaudens, and their goal was to create the most beautiful gold coin in the world. 1907 is the only year that the United States Mint struck two different $20 gold coins. It was the last year of the Liberty-style design, and the first year of the new Saint-Gaudens design, which is absolutely beautiful. It features Lady Liberty marching down the trail to freedom. She’s holding the liberty branch in one hand, and she’s got the torch in the other hand. So that’s a changeover. Collectors love the “first of” and the “last of,” as well as special anniversary edition. When something changes with a coin it can become a huge opportunity. Collectors love firsts and lasts!

With over 30 years of numismatic experience and knowledge, our full-time specialists have earned a solid reputation for customer satisfaction throughout today’s complex market. This is not a journey to be taken alone. We love to help our clients expand their success, and gain insight in the world of collectibles. Contact one of our experts today!

There are many benefits to collecting coins! Read on to discover our three favorite reasons!

Private Transactions
One incredible benefit of purchasing collectible coins is that these transactions are private and anonymous. No one needs to know you have these coins and unlike gold bars or real estate, there is no reporting required.

Easy to Transport
Coins are portable so you can move your wealth around much easier than a vacation home or a yacht.

Ready To Be Passed Down
Coins are very easy to divide between your children or grandchildren. You certainly can’t give half a yacht away!

When you love coins like we do, it feels like you can never have enough, but our team at International Coin Alliance can help you get one step closer!